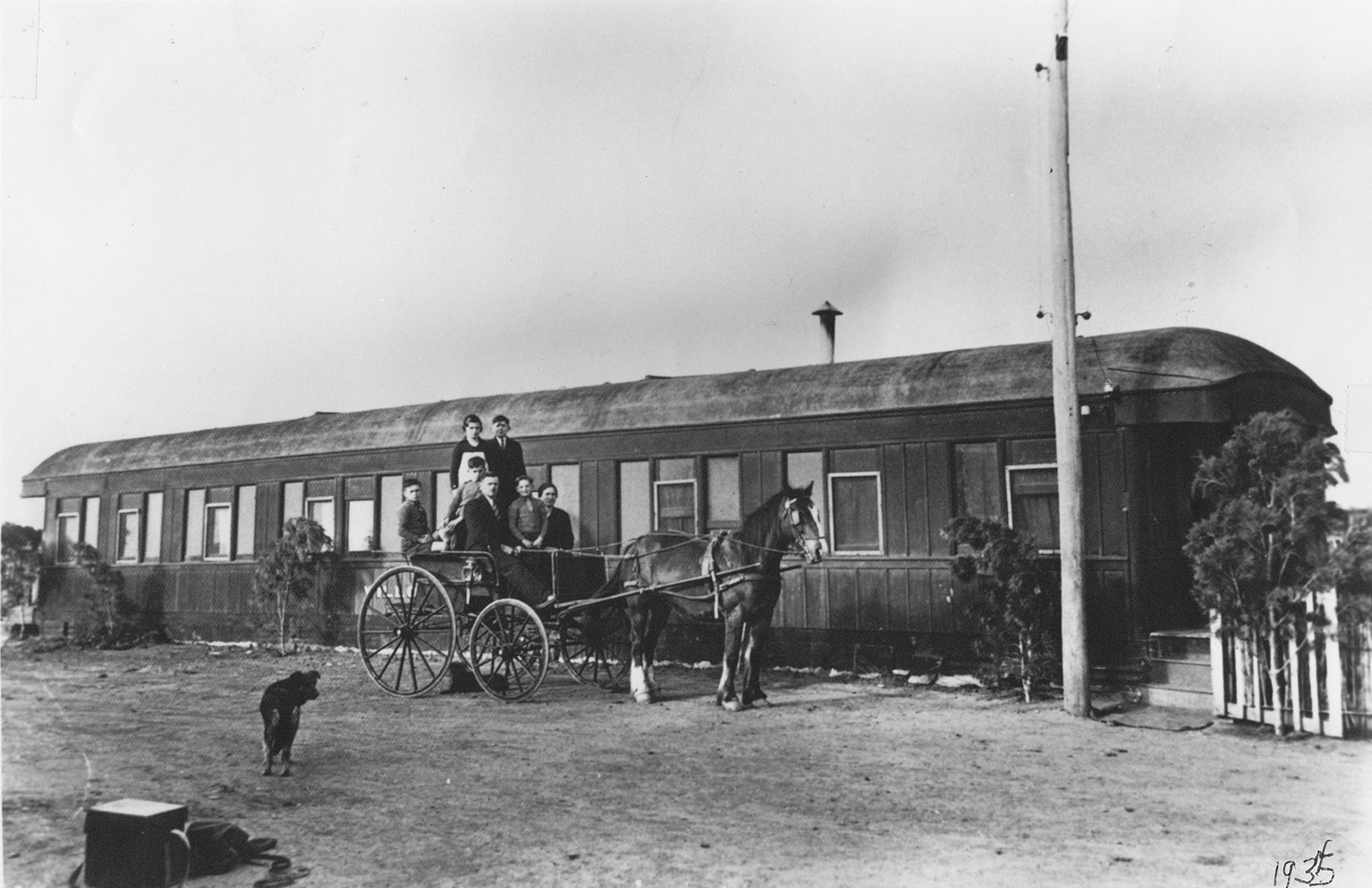 We are recommencing the biographies of Veneto market gardener  families. The information is taken from the oral history interviews recorded with family members over the last 12 years. This post features the Tonellato family

Two photos taken in 1935 show the train carriage which was home for the Tonellato family until 1954. The carriage had been built for the 1927 Royal visit of the Duke of York (later King George VI) and Duchess of York.

Secondo Tonellato was born in 1893 in Caselle d”Altivole, Province of Treviso and arrived in Adelaide on 27 August 1927 on the “Citta’ di Genova.” Giovanni Santin, a neighbour from Caselle di Altivole and Angelo Piovesan from Ponzano Veneto were also on that ship.  Secondo left behind his wife, Elisabetta and five children. The youngest, Orlando, was born after his father left Italy.

When he arrived in Adelaide, Secondo was 34 years old and in the first years he worked as a labourer building roads at Karoonda. Then he leased land on Frogmore Road adjacent to Angelo Piovesan. He worked hard, and after eight years was able to pay the fares for his family to join him. Elisabetta and the children Lui, aged 13 years; Rosina, 12 years; Alberto, 10 years, Lino, 8 years and Orlando or Nano, 7 years, arrived in Port Pirie in 1935.

Two years later Secondo and Elisabetta took Assunta Panazzolo, the daughter of Secondo’s sister, into the family. She was just three-months old and her mother, Assunta, had died soon after giving birth to her baby.

The Royal carriage or the vagon, as the veneti called it, solved the problem of accommodating the family. Inside there were five bedrooms, a saloon, kitchen and a shower room. It was ornate with burgundy velvet upholstery, polished dark wood and etched glass windows. Many people interviewed for the project remembered the beauty of the vagon. Terry Judd, daughter of Lino and Rosanna Tonellato and a granddaughter of Secondo and Elisabetta, recalled the fun of playing in the vagon as a small child and pulling down the seats in the corridor.

Secondo leased land between Frogmore and Findon Roads and the family worked in the market gardens. At first Secondo grew outside vegetables to sell at market and gradually bought glasshouses and grew tomatoes. During World War II, the family had a contract with the Army to grow carrots, cabbages and potatoes.

As the first three of the family married, they acquired their own market gardens. Secondo, Lino and Nano, the youngest sons, bought 10 acres on Findon Road in 1951.

After they built their first house, Secondo and Elisabetta provided accommodation in the vagon for newly arrived Italian migrants who worked in the western suburbs. When it burnt down in the 1960s, the Veneto community was sad.

Secondo was a market gardener for more than 40 years, and worked the land and glasshouses with his son, Nano, until 1969.  Lui and Italia Tonellato and their son, Adrian, worked the land on Frogmore Road until the 1970s.

If you are interested in reading an article about the Tonellato family that was published in the Catholic magazine, “Il Messaggero” in June 1986, click here.

How to read the Tonellato article below on mobile devices

To view the article below click on the blue text and use the control on top of the transcript.
The – + signs enlarge or decrease the document. The arrows take you to the next or back a page. The controls also show you what page you are on.

Full screen is available on your desktop computer and some mobile devices. To view the transcript on a full screen click the four arrow link .

To return to the article click the four arrows at bottom left of  the screen. 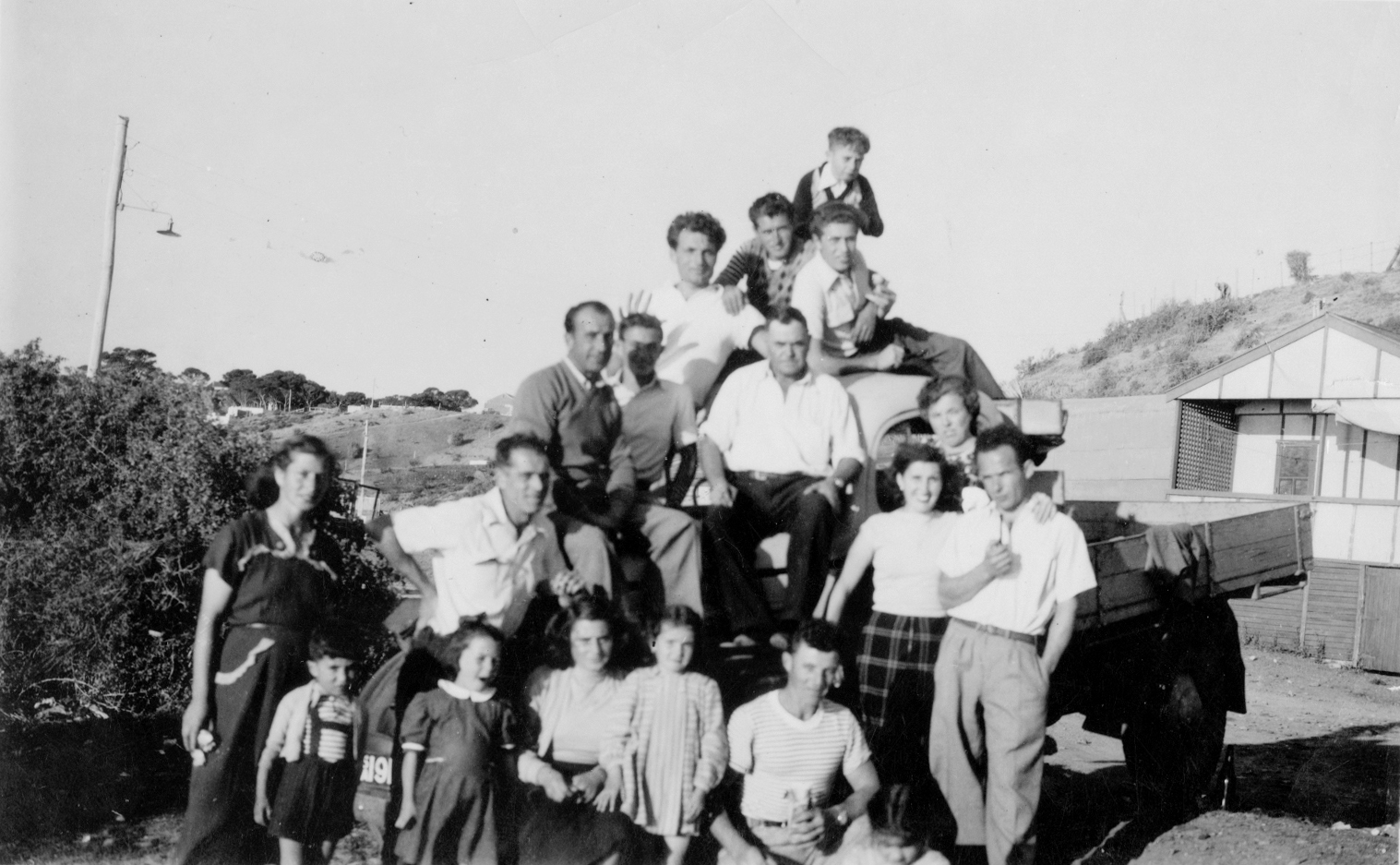 The year is already underway but please accept my best wishes for 2020 – and for all that will unfold.

To start the blogs for the year, I thought it would be interesting to offer some excerpts from the oral history interviews about how the Veneto market gardener families celebrated the new year.

Anna Santin nee Mattiazzo, 17 April 2013
One of the family used to get the truck, and we used to put a tarpaulin on, on top, and we all used to get behind with a keg of beer, and something to eat and go around, St Kilda, mostly it was.

Lena Moscheni nee Rossetto 12 September 2014
I remember New Year’s Eve … or New Year’s Day I should say, we’d go around to people’s houses. It was bad luck if a girl went, it had to be a boy first, and we’d go to the people, Italians, and say, Buon anno! (Happy New Year!). And they used to give us 20 cents or 10 cents, just like that, but the boys had to go first and I had to come last, because I was a girl.

Bruno Piovesan, 4 October 2008
… they used to go to St Kilda, which is just north of Adelaide, of course (laughs) but it felt like it was miles away at the time:  that was a picnic time, once-a-year picnic time. Oh, yes, on the St Kilda beach.  And they used to have motorbike races and different things.  And they called it a ‘swimming pool’, but gee whiz, it was just a hole in the dirt, virtually.  [laughs] They used to have their own way of having fun …

Christine Zampin, 26 February 2017
… and then we used to go to Saint Kilda every New Year’s Day in trucks. … Oh, all the men and the boys and kids used to go out and we used to get cockles and crabs and bring them back and then they’d light a fire and cook them up and eat them. And everyone used to bring food. Oh, it was fantastic! And every New Year’s Day, they had these games, down near the Saint Kilda hotel … for running and all that sort of thing, … Yeah it was really good fun. A lot of people used to go to those picnics down at Saint Kilda.

Noemi Campagnolo nee Zalunardo, 20 March 2014
I remember them going to St Kilda … People we knew, Tonellatos, …  a lot of my relatives, like my zio Narciso. Lina, all the Zampins, they used to live on Angley Avenue in Findon … a lot of them that used to go, we used to have a  truck full, follow the leader. It was good.

Diana Panazzolo nee Santin, 13 September 2013
I remember Bruno Piovesan, I think it was Frankie … Ballestrin, I don’t know if it was Nillo [Piovesan] and [Guido] Rebuli …  I remember a New Year’s morning and they came to Mum and Dad’s bedroom window, they started knocking at the window and singing. [laughs] I remember waking up, “what was happening?”  …  that’s really, one of my happiest memories …. 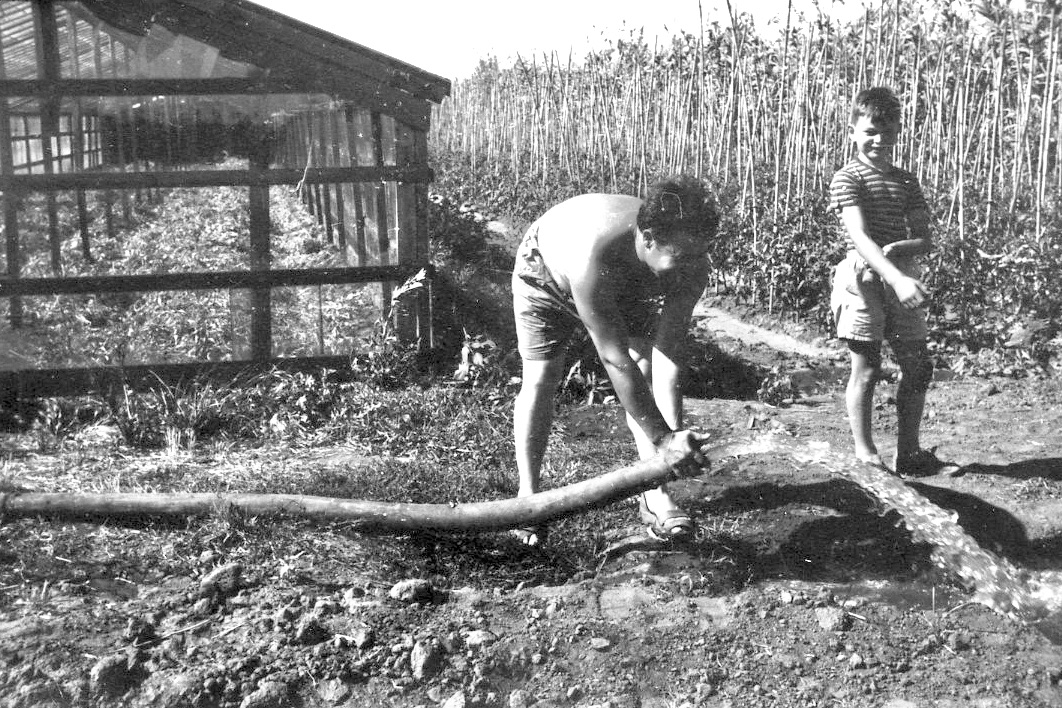 Most of the Veneto market gardener families had large numbers of glasshouses on their land where they grew tomatoes and beans. Before chemicals were introduced to manage problems with disease, the market gardeners had to shift the glasshouses to ensure the soil was not infected.

The following excerpts from oral history interviews provide glimpses of the work in the glasshouses.

Single glasshouses [were] only 15 foot wide and 112 foot long … The middle of the glasshouse would only be about 6 foot 6, the side would be about 4 foot 6 … every two years they used to pull them down …

Frankie Ballestrin, 12 December 2008, 14 January 2009
… we used to change glasshouses at the age of 12, 13 … My cousin and myself, homework … was to drill holes and put up a row of posts each night we come home from school. Our parents would prepare the rails on the grounds and that was the start of setting up your glasshouse. And we put the rail in, then they’d have the rail on top of it and then we’d come home and nail the rafters in. You know, they’d show us what to do, sort of thing. And then carry on from there. And then slide up the glass and all the rest. It wasn’t easy.

The crops used to finish around about December. January, February we used to, you had to take down all the glasses and put them in boxes so they could shift the posts in a different part, and the men used to, the men used to be inside with us women on the outside pushing the glasses up. Oh, it was very, very hot … you’d burn your hands just about, and it had to be done until after, a few years afterwards they used to inject the dirt in the glasshouses so they didn’t have to be shifted anymore.

Depending on the weather, if it was hot, we used to get up very early, about 3:00, 3:30 or 4:00 o’clock sometimes, depending what we were doing … If it was going to be a hot day, we used to get the water, … watering the glasshouses or whatever was outside. And then — we did as much as we could and when it got too hot, we had to stop because the water was sinking away, and as soon as it started cooling down, we used to start watering again. So I’d be watering till late at night.

Mel Recchi, 18 June 2014
You know, I still remember working in the garden with him [Dad], and if it was Christmas day and it was 40 degrees, hot, he’d be out working, Christmas Day. If it was Easter time, Easter Sunday, if the crops needed to be watered, he’d be out watering his crops. So he couldn’t afford to, it was the same with anybody with glasshouses, and you had a crop to pick that day, you had to work that day.