Last month I submitted my thesis after five years of research and writing. My thesis is called:
‘I buy this piece of ground here’: Establishing family market gardens and transplanting Veneto identity in Adelaide’s western suburbs 1920s – 1970s.

My thesis examines the formation of the community of market gardeners at Kidman Park and Flinders Park between the wars. The 18 men and one woman who migrated from villages in the provinces of Treviso and Vicenza between 1926 and 1928 did not all know each other until they lived in boarding houses in the west end of the city of Adelaide. The pioneers faced the harsh years of the Depression and had to find work where ever they could including rural areas of South Australia, Victoria and north Queensland and the Adelaide hills. By the end of the 1930s all the pioneers had leased land for market gardens just north of the River Torrens in the area that they called Lockleys. Today we know that locality as Kidman Park and Flinders Park.

My thesis focuses on the market gardeners in the interwar years, a period that has not been written about very much in Australian migration history. I am grateful to the 60 members of three generations who recorded oral history interviews:

the pioneers or first generation, those who arrived as children (1.5 generation) and the second generation born in Australia. It is fortunate that we have the voices of Vittoria and Angeline Marchioro, the only pioneers to be recorded for another project in 1984.

Oral history interviews
In their interviews the family members speak of their everyday lives and include details of families acquiring land and working hard to develop their market gardens, learning techniques and planting new crops, moving glasshouses and selling vegetables at market which was unfamiliar since most of the pioneers had come from very poor families where there was no excess. The narrators recall celebrating weddings, first communions, confirmations and birthdays in packing sheds and they proudly talk about their families and the strong community networks that supported them although there were challenges living in an often hostile political, social and economic new world in Australia.

Using archival records
As well as the oral histories, I used archival materials like family records and documents about land ownership. In 2018 I was fortunate to receive a scholarship to research in Italy. Thanks to several relatives of the veneti who helped me in the Veneto region, I located records of births, marriages and deaths from parishes and comuni or local councils. In Australia I had access to records from the National Archives of Australia including arrival documents, applications for naturalisation, applications to own land, records from the war and conscription of some of the men into the Civil Aliens Corps and their service for the war effort in remote areas. 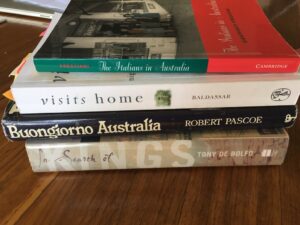 Books that were important
My research draws on books about Italians in Australia to provide a wider understanding of the situation of migrants between the wars, the experiences of the Depression, World War II and post-war migration.

Two books about veneti in Australia were particularly helpful – From Paesani to Global Italians: Veneto Migrants in Australia by Loretta Baldassar and Ros Pesman. The other, by Annamaria Davine, ‘Vegnimo da Conco ma Simo Veneti’: A Study of the Immigration and Settlement of the Veneti in Central and West Gippsland 1925-1970, covers a similar period that I focus on in my thesis. 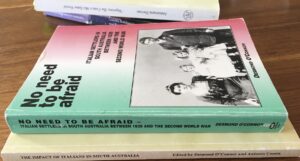 I often consulted Desmond O’Connor’s No Need to be Afraid: Italian Settlers in South Australia between 1839 and the Second World War.

Thank you to …
I am pleased to have completed the thesis and I am grateful to many people in Adelaide and in the Veneto region for their help as I gathered interviews, research and ideas. My project actually began in 2006 when Aida Innocente assisted me with interviewing Angelo, her Dad about the family half-case factory. Aida also put me in touch with Johnny and Eleonora Marchioro.

Johnny and Eleonora showed interest in this project right from the start and made it possible for me to meet other sons and daughters of the pioneers and assisted with many aspects including the exhibition we held in 2011, interviews and presentations with Frankie Ballestrin and Bruno Piovesan. I am fortunate that so many people agreed to be interviewed and record their memories of growing up on the market gardens and aspects of migration stories. Thanks to Michael Campbell for technical assistance and to all the other people who assisted throughout the last five years!

My thesis tells the story about the community of Veneto market gardeners. It examines the veneti who migrated during the interwar years, a period that has not been written about very much in Australian migration history. It focuses on the creation of the formation of a paese that reflected their solidarity and resilience and their continuing connection to their families in the Veneto region. It also raises new questions about migration, the significance of land and what it means for different generations of migrant families to adjust and belong in Australia.

Late in May I submitted my thesis for examination. When that process is complete I will put a note on the website advising how more of the results of my research can be accessed.

5 thoughts on “Finally – my PhD thesis has been submitted”