Family background
When Gino Piovesan was born on 9 January 1928, his parents lived in a large farm household near Treviso with two uncles and aunts and their families. He remembers that 27 family members including 17 children -13 boys and four girls – lived in the household. Gino was the eldest of seven children.

Gino completed four years of primary school and left when he was ten years old. He began working on the farm with his father and uncles harvesting crops with a scythe. They grew corn, wheat and cultivated grapes on 20 hectares. They were a mezzadria household which meant they gave half of all produce to the landowner. While working on the farm, Gino attended night school and achieved fifth grade.

In 1947 Gino went to France and worked in an underground coal mine at Lyon. When he returned to Italy he was required to do his military service which he completed in March 1950.

Decision to migrate
Following the war jobs were scarce and many young people were leaving to find better futures. When Gino made the decision to emigrate his father supported him. Gino was sponsored by his aunt, Rosalia Piovesan, who lived on Frogmore Road, and he travelled with a friend Leandro Bortoletto. They arrived in Melbourne on 26 November 1950.

The day after Gino arrived, Attilio Piovesan helped him to find a job at General Motors Holden, Woodville. He remembers that there were plenty of jobs in Adelaide. Gino worked night shift, 4:00 pm to 1:30 am. After a night’s sleep, he worked in Rosalia’s market garden from 7:00 am to 11:00 am and in exchange, received free board for a year. Rosalia grew tomatoes and beans in 10 glasshouses and also grew potatoes outside. At first, he lived in the house with the Piovesan family, Rosalia and her sons Nillo, Dino and Bruno. Rosalia’s husband, Angelo had died suddenly in 1949.  Gino helped Dino take vegetables to market three days a week. He was part of the group of men who made bricks for Rosalia’s new house. For several years, Gino shared a small shack on the property with his brother Rino and cousin Sante who had both migrated to Australia in 1952.

Marriage and family
Gino married Natalina Borghetto from Villorba in March 1956 after she arrived from Italy. Natalina started work at 14 years of age after completing primary school. At sixteen she gained employment at a woollen mill and after arriving in Adelaide, worked at Actil at Woodville for a year. They have three children, Frank born in 1957, Lina born in 1961 and Paul, born in 1967. They have four grandchildren Tom and Sarah born in 1990, Manda born in 1994 and Emma born in 1995.

Gino and Natalina have returned to Italy five times – maintaining strong connections with family there.

Working life in Adelaide
Gino worked at GMH until 1966 and then in concrete businesses for over 25 years.

Gino and Natalina bought five acres at Paralowie and established a market garden with ten glasshouses. They grew tomatoes, beans and artichokes which they sold at the East End market. They worked the garden together for nearly 43 years. For over 30 years Gino worked two jobs and Natalina worked in the garden at Paralowie whilst raising their family. 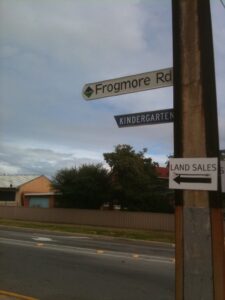 Gino recalls that in 1952 the area of Frogmore Road looked poor. There were shacks scattered on properties and large numbers of glasshouses. He noted the differences between farming in the Veneto region and in Adelaide. There were no glasshouses in Treviso because the weather was too cold. Farmers in Treviso grew vegetables to be self-sufficient whereas in Adelaide, the market gardeners grew vegetables for market and as a livelihood.

Veneto community
Gino was one of the first men to become a Foundation member of the Veneto Club in 1971 and helped lay the foundations of the building which became an important centre for the Veneto community in Adelaide. Gino also remembers helping to build the old Mater Christi church at Gleneagles

Reflections
As a young migrant, Gino thought he’d stay for four years, make some money and return to Italy. However, there were plenty of job opportunities, and the reward of a weekly pay packet was a big reason to stay in Adelaide. In the 70 years since he arrived, Gino says that just about everything has changed. It seemed a quiet place when he first saw it and now, he thinks it has come alive. He also appreciates that the Australian Government looks after elderly people.

Gino loves his vegetable garden and at this time he has lettuce, spinach, tomatoes broad beans, radicchio and capsicums which he tends every day.