In 2007 I saw the first map of the Veneto market garden area in Kidman Park and Flinders Park where the Veneto families farmed. I met Johnny and Eleonora Marchioro at their market garden at Bolivar. Johnny drew a map to indicate where his father and mother, Vittorio and Angelina, had their market garden on Frogmore Road until 1948 when the family moved across the river to White Avenue Lockleys.

Johnny showed the locations where other veneti had their farms on Frogmore Road from the 1930s: the Piovesan’s, Tonellato’s, Santin’s, Zalunardo’s, the Berno families on Valetta Road and the Ballestrin families who worked farms near Findon Road from the early 1940s. There were other families farming in the area and Johnny marked them on the map; Fazzalari’s, Ursini’s, and on Valetta Road, Ballantyne’s and West’s and others. In that area there were extensive market gardens until the early 1970s. I did not know much about this piece of history of the western suburbs of Adelaide.

As the project developed, the City of Charles Sturt provided some great aerial photos of the area that were great resources to show the location of the market gardens. We could pinpoint them on the maps. The photos also showed the changes that have taken place in the area from the time of the first aerial view in 1935 when there was so much open land. The last one was taken in 2011. When you contrast two images taken 76 years apart you see the development of housing that has removed any signs of market gardens.

Gradually people have added the locations of their family market gardens at events that were held for the project. In 2013, we got lots of information at an afternoon in the Findon library and began several versions of the market gardens map.  In 2017 Lino Ballestrin showed me a map he had drawn up that identified the various market gardening families in the 1940s and 1950s. 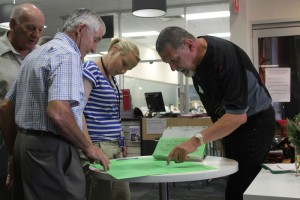 When I was in Italy in 2018 for fieldwork, I took a copy of a photo showing the locations of family market gardens in the early 1950s. It was a pleasure to see the significance of the map to the people who had lived in the Frogmore Road, Valetta Road, Findon Road area many years ago.