In the first few months of 1946, two distressing events touched the lives of the Veneto market gardeners at Kidman Park or at St James Park as it was known then. I first learned about the events in 2008 in oral history interviews with Johnny Marchioro and Bruno Piovesan.

At the time, the Veneto market gardener community was recovering from the difficulties they had experienced during the Second World War. The two shocking incidents would have had an impact on the Veneto community on Frogmore Road and River Road. The incidents were unexpected and both Johnny and Bruno had strong memories of them. After hearing about the events in the interviews, I discovered through Trove that they had been reported in the South Australian newspapers.

Trove is the research portal of the National Library of Australia that preserves newspapers and other documents for people who are investigating family or other lines of history.

A shocking incident on Frogmore Road
In February 1946 a young woman died after throwing herself into a glasshouse on the Tonellato family’s market garden. Bruno was nine years old at the time and more than 60 years later when he was interviewed, he remembered what happened on that day. He recalled that a woman dressed in white had walked onto the market gardens early one afternoon while the children were playing and their parents were having a rest after lunch. Bruno stated:

… and the next thing I heard people screaming around the place, called an ambulance out, and I remember the ambulance picking her up and taking her away.

Well, we weren’t allowed to go close, of course, because my Uncle Attilio was there at the time, and they just started ripping up sheets    to bandage her up before the ambulance come there.  But you don’t forget it.
(Bruno Piovesan, interview 4 October 2008).

The following article appeared two days after the incident on Frogmore Road: 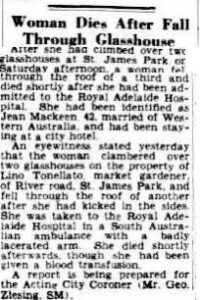 House robbery on Frogmore Road
When Johnny Marchioro was six years old, his parents’ house on Frogmore Road was broken into and £250 in bank notes was stolen. The robbery took place in April 1946. (Checking on a calculation for 1946,the sum would have been equivalent to about $18,000 in 2020.)

Johnny recalls:
Dad had made enough money to buy himself a truck, but before that in 1945 he bought a second‑hand one that was breaking down all the time and he wanted a new truck, and he had three hundred pounds – don’t know where it was, under the bed somewhere – and my uncle was sick, so it was 1945, he used to go and see my auntie from Frogmore Road to Pierson Street [and he] come home and the house was all upside‑down and they said, ‘Oh, thieves, the thieves’, and being small I did not know what thieves were – [laughs] but yes, he looked for his money and it was all gone.  So that was the end, so they had to wait a bit more time to buy his new truck.  That’s why Mum didn’t like to live at Frogmore Road any more, because of that, and the first chance that Dad got to buy his own land he shifted.
(Johnny Marchioro, interview 28 July 2008).

The following article appeared on page 1 of “The News” Monday 15 April, 1946 in the week before Easter. 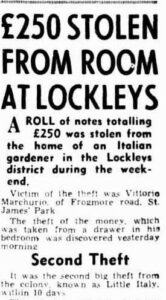 The two incidents are part of the history of the Veneto market gardener community and are remembered today by some who were children at the time because they  were shocking events that disrupted the daily working life and sense of security of the families on their market gardens.

One thought on “Trouble on the market gardens 1946”