If you drive along Findon Road, Valetta Road, Frogmore Road or Grange Road in Flinders Park and Kidman Park today, you won’t see any market gardens. Although you will not see market gardens, I know there are plenty of vegetable gardens in backyards and even the occasional front yard. It’s difficult to believe that these two suburbs once contained great expanses of land that were intensively cultivated for market gardening. There were plentiful glasshouses, sheds and equipment which were clues to the occupation of many families as commercial market gardeners.

The River Torrens has been a source of abundance for food since the time when the Kaurna people occupied and owned the land before colonial settlement in the 1830s. It became an area well known for broad-acre farms and dairies and because the river was liable to flood, there were losses for farmers and later, the Anglo Australian market gardeners who settled along the banks.

I’ve seen records from the 1890s when owners began to subdivide their land and leased it to smaller growers including Chinese market gardeners who leased land from the late 1890s near the River Torrens.

The Veneto group who migrated between 1926 and 1928 had faced problems making a living when they first arrived and after working in labouring jobs in country areas in South Australia and Victoria and even Queensland, they discovered that it was possible to lease land north of the River Torrens. The veneti (and other market gardeners) called the area, ‘Lockleys’ even though the suburb of Lockleys was on the southern side of the River. The Veneto group leased land of different sizes – two acres to ten acres – and began growing vegetables that they had not cultivated in the provinces of Treviso and Vicenza.  They had not used glasshouses so there was much to learn as they entered the commercial market in Adelaide.

The Veneto community endured many challenges. They persevered and raised families – and men, women and children worked very hard on the land. During the Second World War they were able to tolerate racism and hostility and in the 1950s, they began to see the success of their work with the contribution of family members. At this time, they also welcomed new Veneto migrants who arrived after the war.

Today it is difficult to imagine that there was so much open land used for cultivation in the area. An aerial photo taken in January 1949 and held by the City of Charles Sturt shows the large numbers of landholdings used for growing vegetables. In fact, in the area that is now Flinders Park and Kidman Park, the small number of houses indicates that this was really a large rural area although it was only eight kilometres from the city of Adelaide.

What remains today? There are very few signs of market gardens or earlier use of the land for agriculture. The area is densely populated and these are inner suburbs of Adelaide.

However, there are street names that identify some of the families who settled in the area from the late 19th century. For example, Edward John Keele who owned the land holding of 134 acres that was subdivided from the 1890s, is recognised in the name, Keele Place. 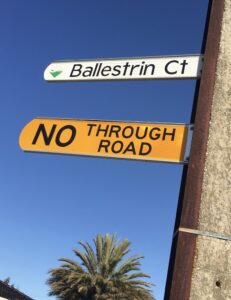 Several pioneer families or those who arrived between 1926 and 1928 are acknowledged by street names in the area. In Flinders Park, Ballestrin Court refers to Isidoro and Maria Gina Ballestrin and family who owned the land where the subdivision was made in the 1980s. There were several Ballestrin families who lived and worked land in the Flinders Park area.

located in the place where they owned market gardens. For example, Rosalia and Angelo Piovesan and their sons are acknowledged in Piovesan Court and Rosalia Court. 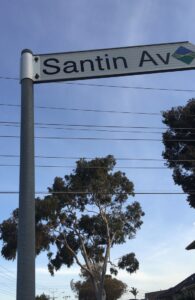 Giovanni and Costantina Santin and their sons and wives who worked land on Frogmore Road until the 1980s are identified by Santin Avenue.

Tonellato Place was named for Secondo and Elisabetta Tonellato and their family who had land off Frogmore Road.

Other Italian families and street names
Pellegrino and Concetta nee Faraonio Mercurio were from Benevento and their family members grew celery on 11 acres of land on the River Torrens and their name endures in Mercurio Drive, Flinders Park. Click on the following link for an article about Concetta written by her son, Antonio, for the ABC in 2019: Click here to read the article.

The Canino family who were originally from Calabria had extensive market gardens on Valetta Road and Canino Drive refers to their ownership of land there.

Carlo Street represents Carlo Zoanetti who bought land on Frogmore Road in 1951 for market gardens. Carlo was the uncle of Mary Tonellato who with her husband, grew vegetables on Findon Road.

The history of food growing in the Flinders Park and Kidman Park area lives on in the memories of people and in oral history interviews recorded with sons and daughters of the Veneto market gardeners. Some street names recall the families who worked the land until it was subdivided beginning in the 1960s.

One thought on “What remains of the market gardens”