This page provides information about the project and how it has been presented by various media organisations. 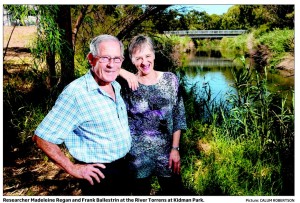 “While the River Torrens now cuts a meandering path through homes and busi- nesses, it was once the life- blood of a thriving market- garden industry in the western suburbs.” Read the article by clicking on the following link. Messenger Press Article January 2016

With their arrival, Italians brought with them not only their love for pasta but also a breadth of knowledge on food production. Madeleine Regan & Craig Middleton from the Migration Museum joined Louise Pascale to talk about a series of talks on the contribution of migrants to the much loved pastime of gardening.

Deborah Bogle  from the Adelaide Advertiser interviewed Madeleine Regan as part of the Migration Museum’s  “Eat Your Words” project.  (Click on the image to enable you to read the article.) 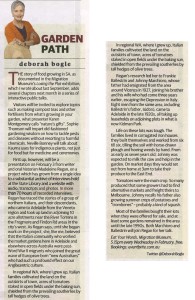 The Il Globo published the “Losing the Plot” Story in its February edition.

Madeleine Regan is the Secretary of Oral History Australia SA/NT branch and has done remarkable work looking at the lives of market gardeners who arrived from the Veneto region of Northern Italy in 1927 and settled in Findon.  She is speaking to Katrina Hall.

Madeleine Regan continues her conversation with Katrina Hall about her research into the lives and the impact on Adelaide’s food of a group of Italian market gardeners from the Veneto region who arrived in 1927.

Last year I wrote about an oral history project on a group of northern Italians who migrated here in the 1920s and established market gardens on the banks of the River Torrens in the area now known as Kidman Park. The project has been a labour of love by writer and researcher Madeleine Regan, who has formed lasting friendships with some of her subjects.

Among them is Johnny Marchioro, whose father arrived in 1927. Johnny has been a lifetime market-gardener. From as early as age 6, he was expected to be helping out, milking the cow and working in the garden. Johnny settled on a block at Bolivar with his wife, Eleonora, where they raise their family and grew produce for market.

When their nest emptied, they sold the house block and moved closer to town and their now adult children, but have continued to grow vegetables on the remaining land. The produce is for family and friends, with the exception of their magnificent crop of globe artichokes.

I’ve always loved eating artichokes, and have long admired their sculptural form and sage green leaves, but we don’t have the space to make it worthwhile growing our own. So it was a pleasure to see them en masse and in full, glorious bloom on the Marchioro’s block a week ago.

The crop is about a month later than usual this year, thanks to the cold winter, much to the consternation of their 50 long-time customers who have been calling weekly to find out when they can pick up their artichokes.

Growing them is the Marchioro’s retirement project, but it’s an exacting one. The plants need almost year-round care. This started watering in January, and, in early autumn, planted new ones, but some of their older plants have been producing for five years.

At the weekend, we tried Eleonora’s recipe for stuffed artichokes with a simple filling of breadcrumbs, parsley and garlic. She promised there was no hairy choke at their base, and she was right. They’re by far the best artichokes I’ve ever eaten. No wonder people clamour for them.

Today I visited the Findon Community Centre to see the exhibition From the Veneto to Frogmore and Findon Roads: stories of Italian market gardeners 1920s -1970s which was launched last weekend.

It’s a great example of a community coming together to create, display and share their history – simply but professionally done.

Consisting of an introductory panel and then a series of 6 storyboards set on 2 simple hinged wooden frames, this small exhibition tells the story of a group of Italian men who migrated from the Veneto region and arrived in Adelaide in 1927.  Within a few years they established market gardens with their wives on Frogmore and Findon Roads and formed a close community of families.

The exhibition was developed by local oral historian Madeleine Regan and the Veneto Community Research Group formed a few years ago.  Since 2007 Madeleine has been gathering oral history interviews with the sons and daughters of the pioneer market gardeners.  Over 25 hours of interviews have been collected and are now held in the State Library of South Australia’s oral history collection.

The exhibition describes life as an Italian migrant in Australia during the 1920s and 30s as well as giving us a picture of ‘Little Italy’ – the market gardens and the glass houses in the Frogmore and Findon Road areas.  Along with text and quotes from oral histories, there are also several images from many of the families’ photo albums.  I particularly like the one of the children riding the Marchiori family’s horse on Frogmore Road in 1946. Difficult to imagine that happening now!