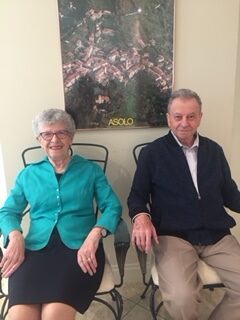 The guest writers for this, and the next blog are Aida Innocente and her uncle and aunt, Gino and Mary Innocente. They have documented the steps in the processes of the annual custom of making salamis.

Gino Innocente arrived in Australia from Caselle di Altivole in November 1954. He was 17. He lived with his brother Angelo and sister-in-law Elsa in White Avenue, Lockleys till he married Mary Rusalen in 1963. Mary had migrated with her family from Fossalon near Trieste in 1950. The Rusalen family were originally from Istria. Gino and Mary moved into the house they built on Carlo Street, off Frogmore Road, after the wedding.

Gino and Mary shared their memories of making salamis with their niece Aida. The words in italics denote the Veneto dialect (v.) or Italian name for the item described.

The autumn killing of the pig was an important tradition in Italy. Contadini (peasants or country people) reared the piglet.  All families had a pigsty.  The pig products gave rural families an important food boost for the entire year. Nothing was wasted: the head (scrogno v.), the feet, the ears, the bones, even the tail were eaten. The blood was used to make a torta (cake). The blood was caught when the pig was slaughtered, and the torta was made immediately. It was a sponge-like, soft cake. The lard was encased and the tallow (strut v. or dezfrit v.) was clarified and put in jars. Both were used in place of oil. Lard was also used for making soap. In Australia excess lard was often thrown away!  Gino remembers that one year there were over 100 kilos of lard from the two pigs they had bought from a farmer in Virginia who promptly took 40 kilos off the final price.

In Italy there was a tax on killing pigs. The dazier (v.) from the Comune (local Council) wasn’t a well-liked official!

In Australia salami making occurred in May and June.  The process involved several stages.

Firstly, the pig was sourced. Pig farmers from Mount Compass and the Bolivar area (often clients of Angelo’s half-case company), were used. Three months before the salami-making day the pig was chosen. Male pigs were preferred. The meat of sows is considered tougher. If the sow is in season the salami will go bad. This would also delay the salami-making.

The farmer was advised one week before the pig was required as he arranged the slaughter with the abattoir. In the early years the farmer himself would slaughter the pig!  The carcass was taken home in two halves and hung in the shed overnight.

The week leading to the salami making was very busy. Salt, pepper, different sized casings all had to be procured.  A local Findon butcher and in later years Master Butchers were our suppliers.  Casings are the intestines of animals. Ox bungs were used for capocollo (cured meat from the neck or shoulder – we added the fillet to the capocollo) and pancetta (cured belly of pork); ox middles for salamis and smaller casings for sausages. Sheep bungs were used for the sopresse (aged large salamis). Casings are full of salt and Gino’s job was to wash them thoroughly. Lemon and vinegar were added to the final rinse. You had to order more than needed as you could not afford to run out of casings!

The shed was cleaned; the copper prepped for the boiling water required throughout the day (keeping the hot water coming was Mary’s job on the day) and a big hole was dug in the backyard where all excesses were buried. Cloths used to dry the skins and all things organic also went in the hole. Lockleys has sandy soil and unbelievably by the next year everything had decomposed. Angelo dug the hole in the same place every year for almost half a century!

It was an important Italian tradition that was carried on in Australia. The Veneti in our community had great pride in their salamis and everyone thought their salamis were the best.  There was a lot of healthy rivalry.  Guests, when they came to visit, in fiò (v), were offered bread and salami for supper. Nothing could be better. Serving the capocollo for the first time was always a special occasion shared with family and friends because it was the most prized of the pig’s produce!

In the next blog we will describe what happened on the salami-making day! 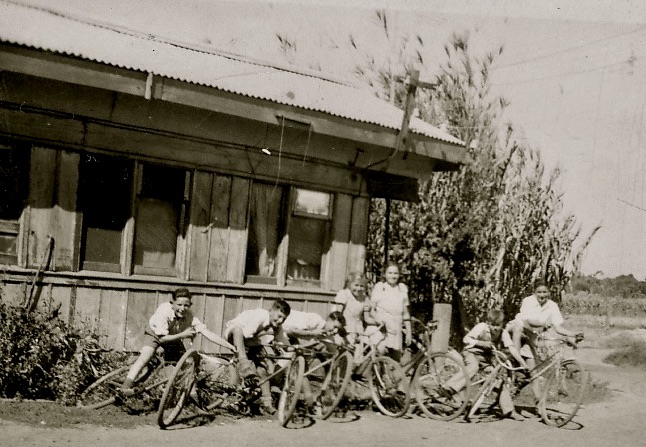 In this blog, Alex Bennett continues his story about the vagon or railway carriage that Secondo Tonellato bought to accommodate his wife, Elisabetta, and five children when they arrived in Adelaide in 1935.

In the second instalment of this article about the vagon we learn of some possible cracks in the story that Prince Albert, the Duke of York the future King of England travelled in this particular carriage in during the Royal Tour of 1927. 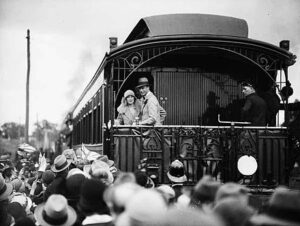 Unfortunately, in the only available photo of the Royal couple on the Royal Train during the 1927 tour it is clear that the roof shape is raised in the centre and quite different to that of the vagon.  It is assumed that all cars in the royal Train were of the same type but this not definite.

The following article from The Adelaide Chronicle may provide an alternative explanation for the Royal connection of the vagon.

The Railways Commissioner’s inspection car, which was completed a few days ago in readiness for use by the Duke of Gloucester while travelling on the South Australian Railways has many modem improvements. The internal woodwork is finished in Queensland walnut, Tasmanian blackwood, and rosewood veneer. The observation department at the rear end of the carriage has comfortable lounge chairs upholstered in blue. A settee is finished in the same colour, and above it is a concealed wireless set. – Next to this compartment is the Commissioner’s private cabin, which will be used by the Duke. It is fitted with a special double wardrobe, and opens into a miniature bathroom with shower and porcelain wash basin. The other compartments have seats which can be converted into berths, an upper berth each, wardrobes, and wash basin. A small dining saloon is at the front end of the car, and the kitchen has fuel cooking appliances and a refrigerator. A small lounge fitted with comfortable chairs completes the car, which Is 78 ft. long. (Adelaide Chronicle, October 1934)

We do know from reports of veneti who knew the vagon that it was much more luxurious than any other train carriages of the time.  For example, Lino Tonellato remembers it because he lived in it:

It was a royal carriage because all the … every window had hunting dogs and the dogs and the …… and the horses, you know, hunting and that … Oh yeah, all carved  in the mirror. (Lino Tonellato 6 July 2010)

The vagon was unfortunately destroyed by fire in the 1960s and  a few of the etched windows are all that remains now.

Dino Piovesan brought one of the windows to an event in 2013 and it was beautiful – bevelled glass with etchings including hunting scenes, with deer with mountain peaks in the background – tantalising evidence that the vagon at some time was fit for a king. 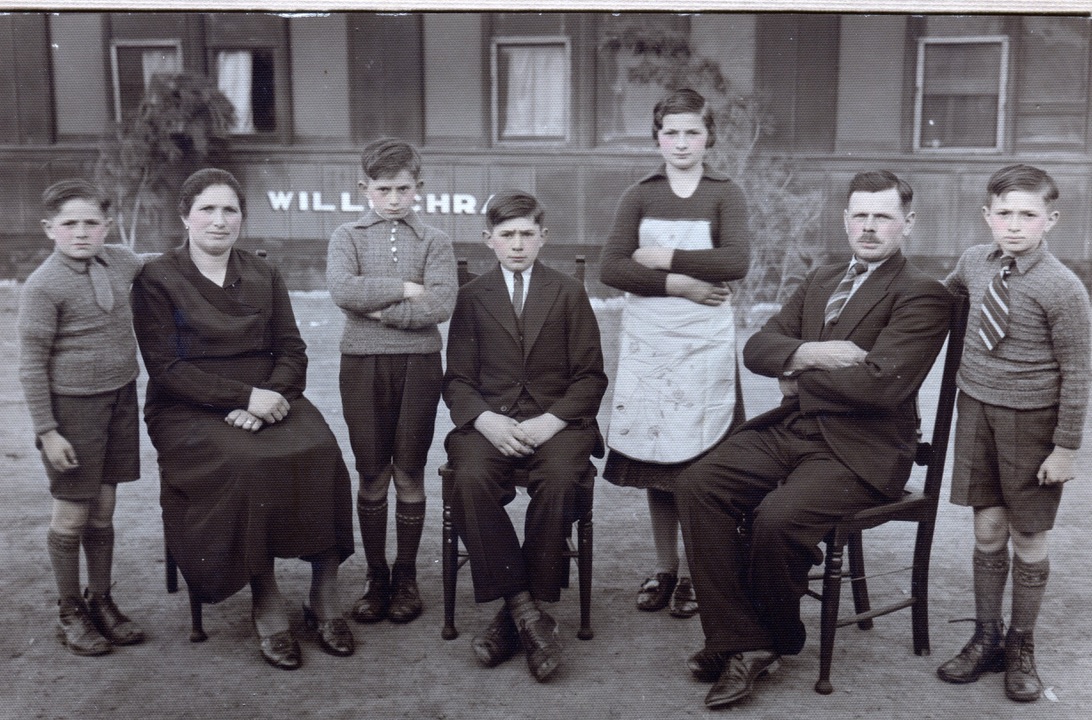 Part One
In this blog, the story of the railway carriage or vagon that was located in the Tonellato family market gardens begins. Next blog you will read further details about the ‘Willochra’ carriage.

Secondo Tonellato migrated from Caselle di Altivole to Australia in 1927 and after he was established , he began planning for his wife and children to arrive from Italy.  In 1935 he purchased a disused carriage from South Australian Railways and moved it to his land at the end of current day Ferguson Ave, Kidman Park. It was there to accommodate Secondo, his wife, Elisabetta and their children Lui, Rosina, Alberto, Lino and Nano. Assunta joined the family in 1937 and she also lived there with Secondo and Elisabetta until a new house was built in 1954.

In an interview with Madeleine Regan Lino Tonellato remembered:

Well it took ‘em all day from early morning to night time, because they had to have the police and shift the electric poles. It was that long they couldn’t get it around the corner in them days from Islington, all the way from Islington down to Lockleys, but they couldn’t get around the corner on the Grange Road there. They were stuck there for about five hours trying to get the post out to get it across (laughs). Then they reckon they had to lift up wires and all on the way. (Lino Tonellato, 6 July 2010)

According those who remember the carriage it was lavishly appointed with polished woodwork, velvet drapes and etched glass.  The name of the carriage was Willochra.

Allegedly this carriage was part of the Royal Train during the 1927 tour by the Duke and Duchess of York, who became King George VI and Queen Elizabeth in 1936. According to reports of the tour the Royal Train comprised 2 ‘pullman sleepers’ and a ‘pullman dining car’ plus standard carriages. In his interview, Lino recalled what it looked like:

Photos supplied by the families.