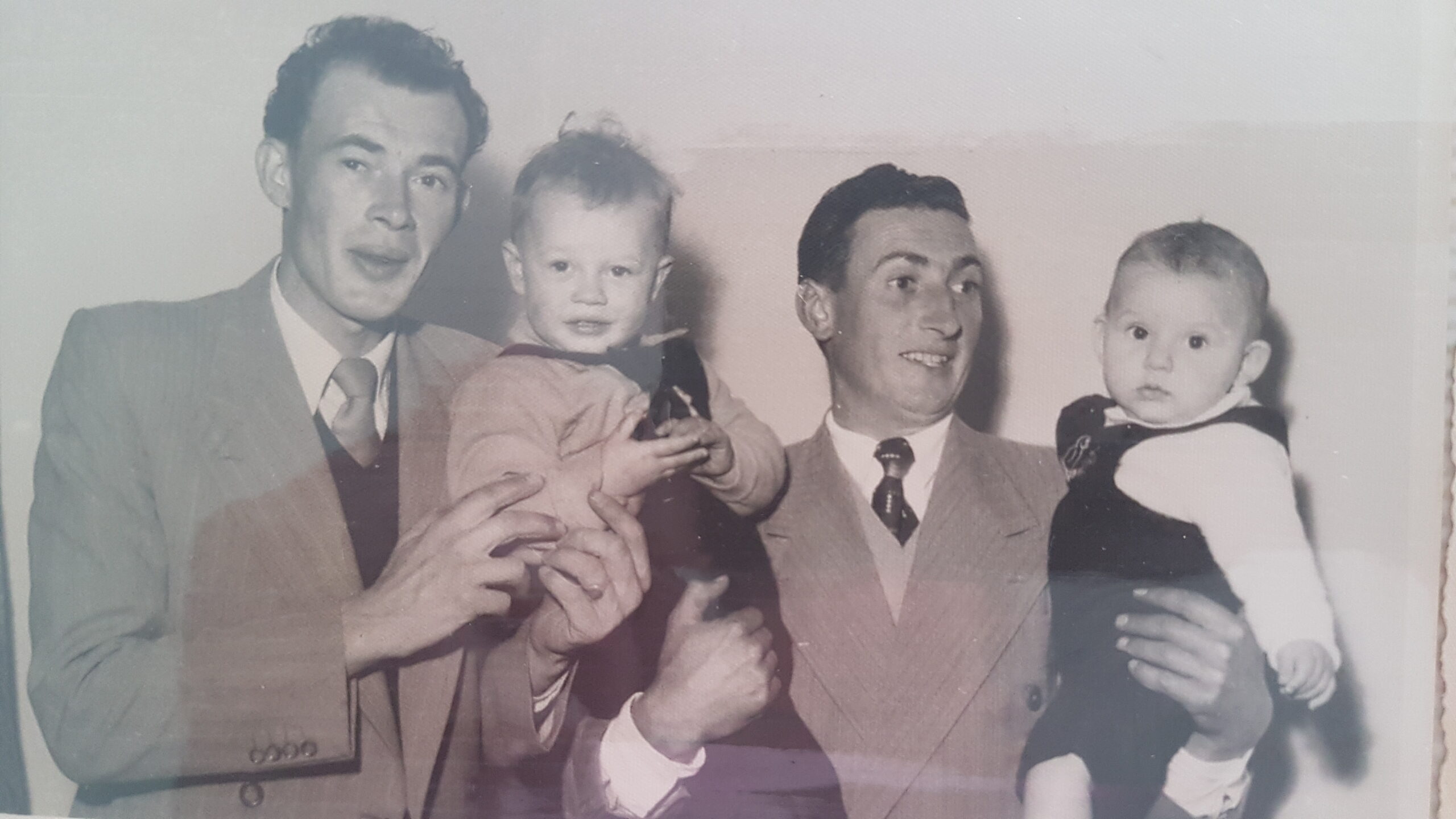 LIFE IN JERVOIS – LINO AND IRENE

Mum and Dad were married in September 1954 and after several months living with the Vanzo family in Parkside they purchased a dairy farm in Jervois. Ernesto and Adele moved to Jervois with Mum and Dad and they remained living with us in the family home at Jervois until they died.

Dad owned a motorbike and sidecar and Mum recalled many hairy trips in the sidecar (pregnant with me) on the old road through the Adelaide hills. I was born in 1955. I vaguely remember doing the trip with them as a youngster on the motorbike to Adelaide. We were in Jervois for exactly one year to the day when in September 1956 the River Murray broke it banks and Jervois flooded.

We relocated to Mt Gambier with our dairy cows for 12 months on a share-farming arrangement. My Mum hated the cold and limited facilities. My brother Robert was born in Mount Gambier. Returning home, then came the big job of draining the swamps, fixing the fences, building a new dairy, reseeding pastures and ‘getting going’ again.

My brothers Dennis and Allan arrived in 1959 and 1963. There were 8 of us in a tiny four- roomed old home. The 1960s were good years along the river at Jervois as people prospered after the devastation of the flood.

Dad and Mum made plans to build a new house. Half of the house was paid for in pounds and the other half was in dollars and we moved into the new house in late 1966. In the 1970s Mum and Dad were able to expand the dairies and purchased highland properties for hay crops and running livestock.

The Jervois community loved Dad’s jovial personality and he volunteered in many organisations supplying his concreting skills at the Jervois football club, primary school, bowling club and the Catholic Church in Tailem Bend. Dad really felt that he was 100% accepted when I was selected as Captain of the Junior Colts football team in 1969.

Every winter we killed a pig and made salami. Dad had a small smokehouse. Every autumn we made the trip to Langhorne Creek to buy grapes to make red wine. Dad’s cellar was well known and often visited by local friends in the Italian community. The Gazzolas, Brions, Chesos, Fabbians and Antonellos were lifelong friends and neighbours. Dad and Mum loved company and had frequent Veneto visitors from Adelaide who loved the beautiful cheese from the Jervois Cheese Factory (10lb, cloth covered rinded cheese.) It kept well and was highly regarded. Dad’s cousins from the Bergamin, Conci, Tonellato and Stocco families loved making the trip to Jervois over the years.

Dad never went back to Italy. For many years he only had memories of hard times.

Just as Dad and Mum were thinking about taking it easier, and maybe making the trip back to Italy, Dad took ill and died when he was 61. It was one month before their 40th wedding anniversary. Sadly, Dad didn’t get to see the grandchildren grow up and marry. He would have been so proud of them and would have loved his great grandchildren! We have lovely memories and he is spoken about often. Mum is 86 and sadly has dementia. They were both hard workers and loved their family dearly. 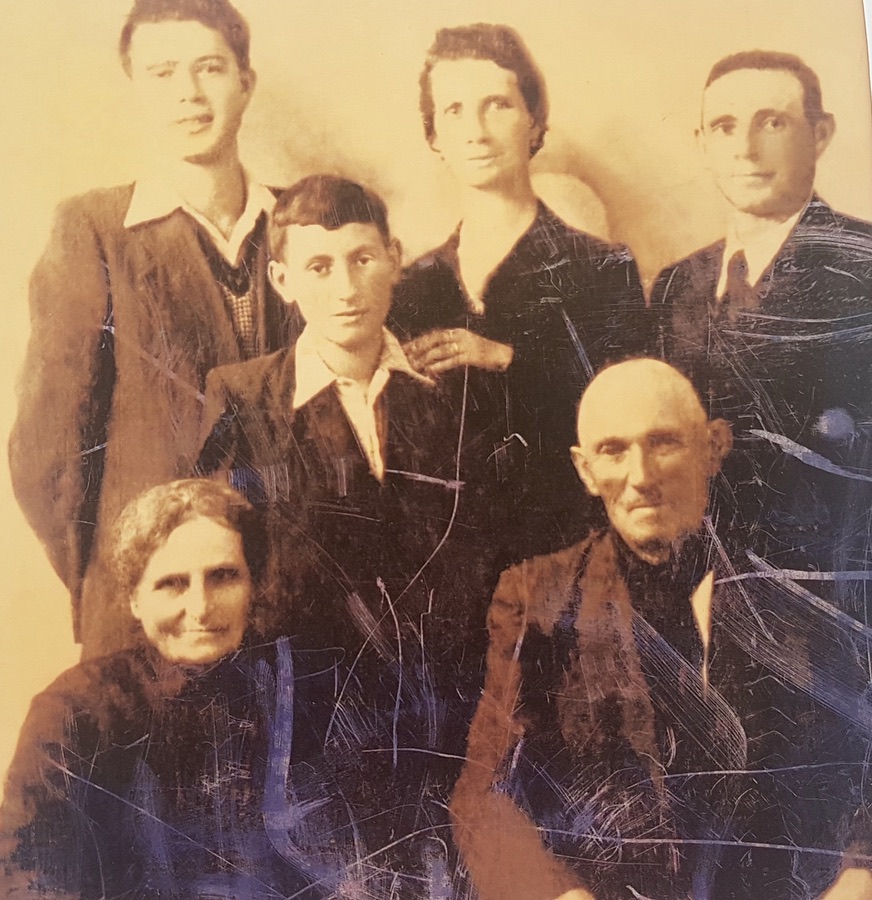 Guest writers, Gary and Lynn Vanzo, have kindly contributed two blogs about the Vanzo family from the province of Padova.

Reading through Madeleine’s blogs and listening to the oral history interviews, there are family connections to the Veneto market gardeners and the shared migrant stories from the Veneto people, even though my family didn’t live in Adelaide.

THE EARLY YEARS
My father, Lino Angelo Vanzo was born in 1932 in San Martino di Lupari in the Province of Padua in the Veneto region. He had an older brother Giuseppe (Beppi) who was 4 years older. Their parents Ernesto and Adele (Giradin) were also from San Martino di Lupari. Ernesto’s parents were Giovanni and Caterina (Antonello) (pictured above).

Dad was 7 when World War II began and he was 13 when it ended, so his early memories were of tough times, little food, and the constant fear of the Fascists and the Germans.

He learnt the trade of shoe-making, but the pay was meagre and overtime was always encouraged, but the extra pay rarely arrived. Other work opportunities were hard to find and mainly seasonal in the years after the war.

AUSTRALIA
In 1949 after much discussion with his parents, Giuseppe left for Australia. He had family contacts through the Bergamin family. Ernesto’s older sister (Amabile Bergamin) and her family were already settled in Adelaide. He also had his sponsor Mr Andrea Antonello, in Jervois.

Dad arrived in Australia in 1951 after Uncle Beppi established himself in Adelaide and worked for the Floreani Brothers where Dad was also offered work . When he received his first pay, Dad calculated on the wall in the workshop the hours he would have had to work in Italy to earn the same money he earned in a week in Adelaide. He couldn’t believe it!

Ernesto and Adele followed in March 1954 and they lived in Liston Street Parkside with Dad and Uncle Beppi and his wife Aunty Mary.

While Uncle Beppi and Aunty Mary remained in Adelaide, the story of Dad shifts to Jervois.

JERVOIS
Visiting their sponsor, Mr Andrea Antonello in Jervois, Dad and Uncle Beppi were told about the  need for workers with concreting experience. In the early 1950’s dairies along the River Murray were being renovated and brought up to the modern standards required at the time.

They were able to secure weekend work at Jervois working on the dairies for local farmers. Dad’s childhood friend Mariano Antonello worked with them as well. This is how Dad met my mother Irene Crivellaro and her family.

Mum was born in 1934 in Stirling. On a trip with the Morgan’s to visit family in Wellington, Attilio accompanied them. When he saw the dairies and river flats along the Murray, he immediately saw the potential and asked around for any work opportunities. He eventually secured a share-farming position with the Gale family and in 1941 Attilio, Maria, Mum and her sister Nilda moved to Jervois. They eventually purchased the property.

In the next blog we write about my parents, Lino and Irene, and their life at Jervois. 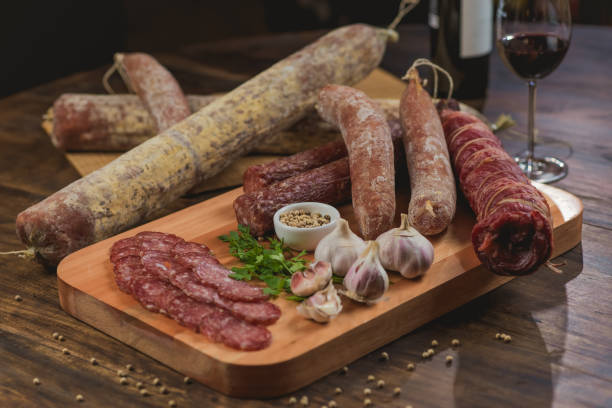 In this blog, guest writers, Aida, Gino and Mary Innocente continue to describe the processes of making the salami.

(The words in italics denote the Veneto dialect (v) or Italian name).

Salami-making occurred over a weekend. Usually the pig carcass was collected from the farm on Saturday and hung in the shed till Sunday, when the actual making occurred.

The salami-maker/pork butcher was key and king.  We referred to him as the becher (v pronounced bekar). This is the Veneto for butcher. He was busy every weekend in autumn. Once you found a becher, you did your best not to let him go! Leandro Bortoletto, Carlo Facchin, Siro Dal Zotto and ‘Schenna’ Ballestrin were amongst the pork butchers we used. They were not butchers, but they had learnt the specialised craft of making salamis in Italy. They brought all the equipment. The mincing machine (only motorised in the mid-sixties), knives, the working table were part of the deal.

The day started at 6 am. The becher carved up the meat, selecting the meat to be minced for the salamis and sopresse, the fillet for the capocollo and bacon for the pancetta, putting aside the skin for the cotechino (sausage made of pork, lard, pork rind which requires cooking), the sausage meat, the lard and prepping everyone’s favourites, the costesine (v) ribs.

Three or four men worked with the becher. The women also worked. They fed the meat into the mincer. Mary was responsible for providing hot water, stoking the fire for the copper boiler all day.  After the salamis were piped into the casings they were run through hot water, so the supply of hot water was important.

Salting the meat was crucial. Interestingly the becher did not salt the meat as this was considered an individual preference. In our family the task fell to Gino! This made his day extremely stressful as it was his responsibility to weigh all the meat prior to mincing then add the salt at 2.5% of the total weight.  Sausages had slightly less salt and the cotechino, that is boiled for 3 hours, had 3% salt. The meat for mincing was weighed in bucket-loads using a pocket balance that Gino still has.

Once the meat was minced and the seasoning added and kneaded through the meat thoroughly by hand by the becher and his helpers, it was time for meranda – breakfast! Elsa was responsible for the meals and snacks. For merenda she always made Zuppa di Trippa (tripe soup) and then the costesine and small bistecche (steaks), fresh from the pig, were barbecued. Friends and paesani were invited to merenda. There was a lot of chat and laughter. It was a celebratory meal.

After merenda, the actual making occurred.

The becher was responsible for packing the mince evenly into the casings. It was important that the packing was not too firm as in the process, the salamis could burst.  The mince would be threaded into the casings and then the becher held the salami under water and squeezed as much as possible, releasing excess moisture. The salamis were then pricked. String was wound at both ends of the salami, to hold it tight. The becher held the string in his mouth, biting it when he needed to tighten the knot. In time he wore a string feeder around his neck. Saving lots of harm to his teeth!

The becher would also string the capocollo and pancetta before and after they were encased in bungs. Later elastic netting was used.

Much folklore surrounded salami-making. Dates were set for when the moon was waning; menstruating women were not permitted to help as their condition might spoil the salamis. In Italy a prank was played on the unsuspecting (usually children or the naive) to go seek the mould for the martondee (v), a hamburger like pattie encased in stomach lining.  In on the joke, neighbours would hand over a bag full of weights to take back to the becher!

Keeping the becher happy on the day was a big priority. He was waited on hand and foot. Drinking wouldn’t start first thing but not much later, remembers Gino. The becher would say sti saadi i xe suti (v) “These salamis are dry.”  It was clear what he meant!

And what was the best part of making salamis? Eating them of course!