Land for the pioneer Veneto market gardeners was essential. They came from contadino (peasant farmer) families who had worked the land for generations. Some families in the Veneto villages owned land. Others worked for land-owners in the mezzadria system which required families who lived in a kind of feudal arrangement to give half of the produce to the land owner each year. The contadini grew corn, wheat and grapes in the Veneto region.

In Australia, the dream was to own land and to be independent.  Most of the veneti began buying their land after the war ended. In their interviews the sons and daughters of the pioneers remember details of the family market gardens in Kidman Park and Flinders Park. Some families had three or four acres and others had more land, up to 18 acres. A number of families bought land north of Adelaide in the 1960s.

In Adelaide, the Veneto market gardeners had to adapt their practices and find out what worked in the climate and what vegetables the market needed. They grew tomatoes in glasshouses –  a new approach for the veneti.

The market gardeners used the same vertical strings to grow and train beans as the tomatoes ripened. In the 1950s market gardeners sent most of their tomatoes to Victoria. Outside vegetables included onions, carrots, peas, trombone, marrows and potatoes. Celery was very successful in the rich soil near the River Torrens. The market gardeners gradually introduced other vegetables such as cucumbers, lettuce, capsicums and artichokes.

Women and children had important roles in the family market gardens. Lina Campagnaro remembered her work in the glasshouses as a child: “I had the job of the low rows so it was my job and I always remember doing French knots on those tomato plants. It was very interesting because I’ve never forgotten that knot to this day. That was one of the jobs and that was done after school or in the holidays or weekends.”

Women worked in the gardens and also in the house and cared for children. One of the interviewees suggested that the women worked harder than the men!

Interviewess recall the efforts of their parents especially preparing for market days when they worked from early morning. In the early days, the market gardeners took their produce to the East End market by horse and cart, a trip of about eight kilometres. In summer, the days ended late with watering the vegetables. In winter when there was frost, the market gardeners got up during the night to protect the tomatoes in the glasshouses. 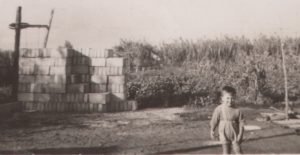